Two Views on Homosexuality, the Bible, and the Church 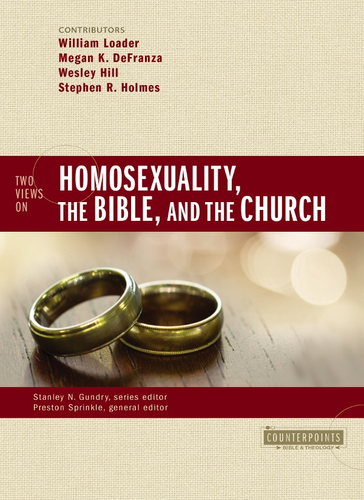 No issue is more divisive or more pressing for the church today than homosexuality. Two Views on Homosexuality, the Bible, and the Church brings a fresh perspective to a well-worn debate. While Christian debates about homosexuality are most often dominated by biblical exegesis, this book seeks to give much-needed attention to the rich history of received Christian tradition, bringing the Bible into conversation with historical and systematic theology. To that end, both theologians and biblical scholars—well accomplished in their fields and conversant in issues of sexuality and gender—articulate and defend each of the two views:

Unique among most debates on homosexuality, this book presents a constructive dialogue between people who disagree on significant ethical and theological matters, and yet maintain a respectful and humanizing posture toward one another. Even as these scholars articulate pointed arguments for their position with academic rigor and depth, they do so cordially, clearly, and compassionately, without demeaning the other.

The main essays are followed by exceptionally insightful responses and rejoinders that interact with their fellow essayists with convicted civility. Holding to a high view of Scripture, a commitment to the gospel and the church, and a love for people—especially those most affected by this topic—the contributors wrestle deeply with the Bible and theology, especially the prohibition texts, the role of procreation, gender complementarity, and pastoral accommodation.

The book concludes with general editor Preston Sprinkle’s reflections on the future of discussions on faith and sexuality.